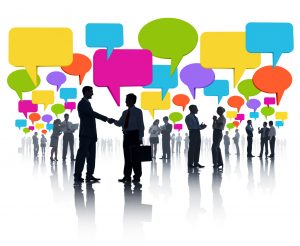 Since starting my business, I’ve really thrown myself into attending business networking events in Edinburgh as a way to meet other business owners and see what I can learn, as well as get my name out there as part of my local marketing. Here is some information about regular events I have tried and my thoughts about them. All of these are free to attend, you only have to buy your own refreshments at the venue.

This was the very first business networking event I ever attended. It’s held in a little cafe and the group tends to be quite small-ish, around 10 women. It was ideal for a first-time business networker as I didn’t feel intimidated by a massive group or struggle with wondering who to talk to. I simply sat down at the table and got chatting to the women nearest to me first. I was able to eventually at least talk a little bit to everyone at the table, who were all lovely and welcoming. They are from a variety of professions and we all swapped business cards. This was a great casual event that I have continued to attend since.

Held in a fancy bar, this was my first mixed gender networking event, which was good because I’m not interested in limiting myself to connecting with only women. I got to meet some men and there was a bit more variety in the types of people there, and again a good mix of professions to connect with if you are B2B or looking for a service yourself. I really like how it’s on every week, so if you miss one there’s usually always another one to attend the very next week. This also means that you see different people from week to week and the number of attendees varies too, but there are also a few regulars. There’s a speaker once a month, which seems to attract a slighter larger audience than other weeks, but it’s great for attendees to learn something formally, as well as giving a platform to the speaker to market their skills. I really enjoy this group, it’s fairly casual and I plan to continue attending as often as I can.

This is a very popular casual event held in the UK’s largest technology incubator. As the name suggests, it’s mainly for people who work in the creative industries. There was a table where we got given name tags, a number of useful flyers for the venue and event host FreeAgent, as well as another table with free tea, coffee and breakfast. The event was very busy – there must have been at least 50 people in the room and it got very noisy at times. I admit that it felt a bit intimidating not being sure which group or person to talk to. However, I managed to get talking to a decent number of interesting folk and swap a few business cards. At this scale of event, it’s virtually impossible to talk to everyone, so it’s important to just concentrate on making a few quality connections, like you should be doing anyway at any business networking. I also trialled the free hotdesking at the venue afterwards, which I liked and I’ll talk more about this in another blog post. This probably isn’t my favourite event to be honest, but I still came out of that first event with a couple of good contacts, including the owner of an new budget co-working space for start-ups, Desk Junction.

Business Gateway is an organisation that offers lots of free support to businesses across Scotland. Some of this comes in the form of many workshops and events that cover various topics. I attended one of these recently entitled “Business Startup: Networking”. It involved a speed networking session, which was a first for me, but proved to be a very good practice in effectively describing my business in as concise way as possible (remember, not everyone knows what a virtual assistant is!) as well as showing interest in the other person, finding out about their business and squeezing in a valuable conversation all in five minutes. There were about 20 attendees and a good mix of professions. The usual business-card-swapping took place with people I connected with, and there were also a couple of presentations, including one by business analyst, Agnesia Agrella, who introduced us to the fascinating Cash Flow game. This was a great formal event, and I plan to continue attending Business Gateway events and using their services as I grow my business.

9am to 10am, 2nd Wednesday of the month at CodeBase, 38 Castle Terrace, Edinburgh EH3 9DZ

Like Creative Circles, this is also held in CodeBase, but is significantly smaller – when I went it was a group of 6 people sat around one table. These were also mainly techies, with a couple of business service people like me. Again, it was obviously easy to get chatting to everyone, although some of the things they were talking about went way over my head as it was all so techie-orientated. Probably another group that wasn’t most suited to me, but again they were lovely and interesting to talk to and I had a pleasant time at this meetup. That said, the Open Coffee Club is a worldwide group, and the one I went to in London was bigger and did have more of a mix of professions, so it can really vary depending on area!

This is a very new networking event that debuted in January 2017, which I found out about through the Holiday Inn sales manager, Hazel Johnstone, who I’d met at other networking events in Edinburgh. It had a very good turnout for its first time, filling the 30 or so seats that were laid out audience-style in one of the hotel’s conference rooms. It began with everyone standing to having a chat together. Then we were all told to sit down to watch a planned interactive presentation given by Gail Logan of Kore Transformation, who gave us a free sampling of her coaching techniques. I understand that this is going to be the format for all future occurrences of this event, which works very well and has a good mix of being professional whilst also not being overly formal. I look forward to seeing this success repeated in other future events.

This is only a small selection of the networking events that are available in Edinburgh. I have others that I also plan on attending in the coming weeks, and will write a “part 2” blog post about those once I’ve visited a considerable amount (UPDATE: Have now published Part 2!). I have enjoyed going to all these different events so far and have a good idea of the ones that I’d like to return to. I also hope this post helped you if you’re looking to do some business networking in Edinburgh. I would recommend of course using Google to find events, as well as Meetup and Eventbrite. Happy networking!